The Zetta-Drone is a large Security Sentry designed to fend off invaders within the Batcave: Inner Sanctum.

Corrupted by Brainiac, the Zetta-Drone is the second boss encountered in the Batcave: Inner Sanctum raid/alert.

The Zetta-Drone is arguably the easiest boss in this instance. It is always accompanied by four smaller Bat-Drones which should be ignored for the most part as they will immediately be replaced when destroyed. However, this could be exploited with certain moves such as an Encasement-Pyrokinesis combo that allows you to do massive damage to the Zetta-Drone as long as it is near the Bat-Drones.

OMAC Nano Repair Units will periodically spawn at either the North or South side of the room. They are slow-moving green Omacs that are highly susceptible to crowd control effects and will self destruct once their health is low enough. For the most part they will ignore the players and attempt to get close to the Zetta-Drone and heal it, which is why they need to be destroyed quickly. Their healing move is vulnerable to interrupt.

As the fight progresses the boss will gain two different spin abilities. The first will be at around 80% health and will cause it to spin into the player team, knocking back and damaging everyone. The second spin acquired at around 40% health will cause it to move North and South in a straight line down the middle of the room. Players should stay out of its path and focus on the drones.

It will also sometimes "upgrade" one of the Bat Drones, causing it to spin uncontrollably into the player team until it is destroyed. 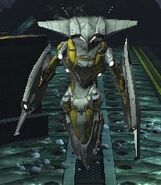 "Intruders will be annihilated. Survivors will be given hats." —Zetta-Drone