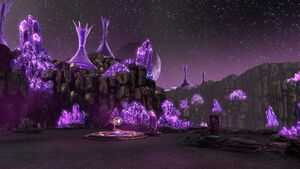 Zamaron is a remote planet that became the home of the all-female Zamaron race.

Ruled by Queen Aga'po, the planet is overrun by a sapphire crystal that has come to be known as "Star Sapphire Crystal". The planet now serves as the central headquarters and homeplanet of the Star Sapphire Corps.

When the renegade Maltusian scientist Krona performed a forbidden experiment that had terrible effects on the whole universe, the Maltusians argued about how to deal with the situation. One group of Oans decided to dedicate their eternal existences to embrace logic and contain evil; they became the Guardians of the Universe and relocated to the planet Oa. The females, however, saw no need to involve themselves and left their mates to settle on the planet Zamaron where they could hold fast to their passion and developed into a race of warrior women.
Within the planet's caves they found the pair of mummified bodies of Khu-Fu and Chya-ra, embracing each other in death. Between the two was a violet crystal the Zamarons called the Star Sapphire. Concluding that the gem was the ultimate expression of love the Zamarons sought to emulate it but failed to fully realize that the Sapphire was a parasite which suppressed its host's inhibitions.

After realizing that the Star Sapphire was too unstable to be controlled, the Zamarons attempted to lessen its power by reforming it into a single crystal and installing it into a Power Battery.
Building the Central Power Battery over the mummified remains of Khu-Fu and Chya-ra, the Zamarons decided to build their own corps in preparation for the War of Light prophecy, sending out Star Sapphire Rings powered by the emotion of love to find those who have been spurned in love or have otherwise lost someone they love. 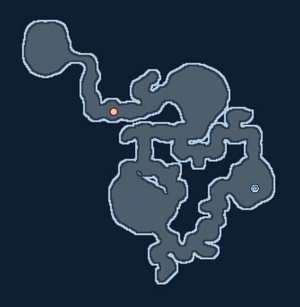