Chosen during Character Creation, a character's Weapon is what defines their combat abilities. Some weapons specialize in ranged attacks, some in melee, and some dabble in both. That being said, all weapons possess melee and ranged attacks at varying levels of effectiveness depending on their specialty.

While initially only able to choose one weapon type, after level 10 the player can choose to put skill points into other weapon trees.

All Safe Houses have a vendor that sells a level 1 weapon in every type, which may be useful for trying out new types.

Weapon styles will usually adapt to the player character's color palette. Styles not tintable will have this fact mentioned in their item description.

See Also: Bow Skills
See Also: List of Bow Styles
Archers wield their bows with shocking speed, precision, and power. Combat with a bow is an improvised flurry of ranged attacks with arrows or bludgeoning attacks with the bow itself when the fighting gets in close. Archers are very unpredictable and can use their trick shots to take most enemies by surprise from any distance.

See Also: Brawling Skill Tree
See Also: List of Brawling Styles
Brawlers are powerful fighters that sacrifice technique for brute strength. Brawlers hold nothing back as they batter their opponents with punches that could knock a normal person down the block.

See Also: Dual Pistol Skill Tree
See Also: List of Dual Pistol Styles
Master sharpshooters wield two pistols, that when fired shoot out large amounts of projectiles, as if they were a natural part of themselves. Using their shooting skills to chain together many attacks at range, wielders can also use the pistols as melee weapons in close combat. Dual pistol wielders can lay down fire in many directions to keep multiple enemies jumping for cover.

See Also: Dual Wield Skill Tree
See Also: List of Dual Wield Styles
Characters that dual wield melee weapons make every movement a potential attack. Dual-wielding characters spin, flip, and unleash a flurry of blinding strikes in a series of timed attacks that keep opponents reeling. They are excellent at fighting multiple opponents and can easily keep a group of enemies at bay.

See Also: Hand Blaster Skill Tree
See Also: List of Hand Blaster Styles
Wielders of amazing abilities, hand blasters hurl their power at their foes with a thrust of their arms or a wave of their hands. Their ranged attacks are chained together with grace and power to keep their enemies at bay, and they excel at charging up their attacks to put even more strength into each blast.

See Also: Martial Arts Skill Tree
See Also: List of Martial Arts Styles
Martial arts fighters strike with speed and fury. They dart in close, strike from all angles, and string together combinations of punches and kicks. Martial artists are the most defensive fighting style, as they can dodge and block while executing various counterattacks.

See Also: Rifle Skill Tree
See Also: List of Rifle Styles
Precision attacks from rifle users can come in many forms and at many distances. Rifle users can attack from a safe position at range or use their weapon to bludgeon opponents that manage to get close. They have an array of ammunition and weapon types, from grenades to flamethrowers.

See Also: Staff Skill Tree
See Also: List of Staff Styles
Wielders of the staff whirl their weapons with blinding speed and force. They strike at their foes with combinations of sweeping arcs, spins, and twirling motions. They are masters of keeping the battlefield under control with stunning efficiency.

See Also: Two-Handed Skill Tree
See Also: List of Two-Handed Styles
Colossal attacks are the usual fare for two-handed weapon masters. Two-handed weapon fighters use mass and reach to their advantage as they swing, slam, and smash their weapons in a series of slow but powerful attacks.

See Also: Shield Skill Tree
See Also: List of Shield Styles
Only available with The Last Laugh DLC Stalwart defense coupled with brutal attacks, cuts and slams when up close are the shield users' method of combat. They use their shields, which are normaly seen as simple defensive equipment, in imaginative ways to render their opponents incapacitated. 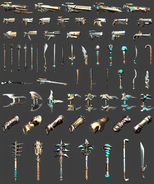