Edit
watch 02:23
Wiki Targeted (Games)
Do you like this video?
Play Sound 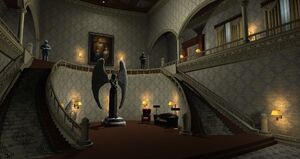 The Stately Wayne Manor is the personal residence of Bruce Wayne; located in the Crest Hill community, twelve miles from Gotham City.

Famously known as the residents of the Wayne family-line, the manor stands amongst hills that are honeycombed with caverns and tunnels collectively known as "the Catacombs". The Waynes have secretly used these caverns through the years for various purposes.

Originally designed by Nathan van Derm as part of a commission for Darius Wayne in 1795, the project was inherited by Darius' sons; Solomon Zebediah Wayne and Joshua Thomas Wayne in 1858.
While the manor was being constructed the Wayne siblings learned of the catacombs beneath the mansion and intended to exploit them for humanitarian purposes. As part of the Underground Railroad, they used the secret caverns to smuggle slaves from the South up the East Coast to safety in Canada. During construction, the area was discovered to be infested by bats from the caves. The area was "cleansed" by unleashing owls to eat the bats that ventured from the caves, however, after the owls left the bats eventually returned.

Following Joshua’s death, the manor was left abandoned until it was rebuilt by Solomon’s son, Alan Wayne, and daughter-in-law, Catherine van Derm. After her passing, Alan Wayne integrated a funeral “Garden of Death” into the design; shaped in the form of a bat in honor of her memory. Along with the Wayne Family cemetery, a hidden “Corpse-road” (a series of roads that connected outlying churches and towns to "mother" churches with burial rites) was created under the manor grounds.

Subsequent generations of the Wayne Family lived in the manor, leading up to Thomas and Martha Wayne, who raised their child, Bruce Wayne, within the manor with the assistance of the family butler Jarvis Pennyworth and, following Jarvis' death, his son, Alfred Pennyworth.
Following the deaths of Thomas and Martha Wayne, the manor was passed onto Alfred's care until Bruce came of age and following Bruce's return from overseas the manor once again served as the home of a member of the Wayne family; with Bruce using the cavern system below the manor to slowly develop an underground headquarters for his operation as the Batman.

Following the Cataclysm; an earthquake that leveled the majority of Gotham City, the manor’s west wing and the property grounds, including the cave system, were significantly damaged and they remained as such throughout the year that Gotham was declared a No Man's Land by the United States Government.
Rebuilt from scratch, the manor’s reconstruction was inspired from the Gothic edifices designed by Cyrus Pinkney; Gotham City’s original architect. Looking more like a European castle, with battlements and turrets, the manor was designed to be as eco-friendly as possible, powered with solar panels and other devices. It is also wired with a sophisticated security system to protect its residence and the secret catacombs that lay beneath it.

Following the Infinite Crisis incident, the Earth and its history was reshaped and the manor suddenly returned to its pre-cataclysm appearance.

Community content is available under CC-BY-SA unless otherwise noted.