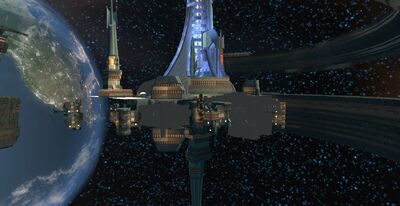 The Watchtower is an orbital space station that acts as the main headquarters of the Heroes.

In the Watchtower heroes can find vendors for buying Iconic Battle Suits and weapons, as well as teleporters to all the in-game cities, low-tier raid instances and high-tier episode open world zones. The Watchtower also acts as a safe zone for heroes as only heroes are allowed to visit it and there are no enemies located there. The Watchtower can be visited by teleporting there directly from your map, by using one of the teleporters in any of the police stations across any of the cities, or from a teleporter found in the south of Gotham City.

When the Justice League was reformed by Wonder Woman, Superman and Batman in response to the new influx of heroes and villains on Earth, the Watchtower was built as the team's headquarters; a space-borne satellite, orbiting 22,300 miles above the Earth.

Linked with the Hall of Justice in Washington DC via an archway-type teleporation system, the satellite was designed by both Wonder Woman and Green Lantern (John Stewart), and paid for by Wayne Enterprises, Queen Industries and Kord Legacy.

Following the influx of heroes on Earth thanks to Future Lex Luthor's exobytes, the Watchtower was renovated to accommodate for the new recruits; creating individual wings that catered to either Meta, Magic or Tech based heroes.

Brainiac later attacked the Watchtower, infiltrating the satellite and causing a disruption by freeing the inmates in the Watchtower Containment Facility before attempting to overload the satellite's Reactor Core. The attempt was, however, stopped by a small group of new heroes.

In the alternate timeline, Brainiac attacked the Justice League onboard the JLA Watchtower following the successful abduction of the Daily Planet building.

Using a force consisting of Brainiac Enforcers and Exobytes, Brainiac distracted the League with fighting the larger Enforcers while he infected the Watchtower with the Exobytes; systematically destroying the satellite's communications and life support systems before destabilizing the power core and causing the station to self destruct. While the majority of the League managed to survive and escape, Aquaman was trapped inside a healing apparatus at the initiation of the stations' destruction however he is saved by Superman as the station's ruins begin entry into Earth's gravity due to Brainiac attempting to destroy the JLA by sending the station's ruins to impact on Metropolis. While he had ultimately failed, a large section of the station crashed in Metropolis' industrial district, maiming Lex Luthor. 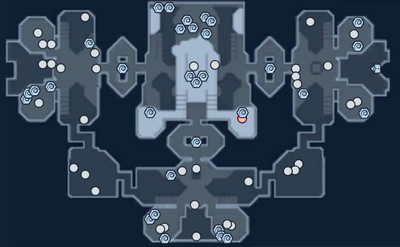