Imps and demons run amuck in the fiery wasteland, allowing Jacob and Jack to seductively and slowly make their moves. Raven, annoyed as ever by her brothers, has asked for your help in putting them back in their places. Enter the madness and mayhem of the Gotham Wastelands in this Duo.

The Gotham Wastelands is full of mayhem and madness. Imps and demons run amuck in the fiery wasteland, allowing Jacob and Jack to seductively and slowly (respectively) make their moves. Raven, annoyed as ever by her brothers, has asked for your help in putting them back in their places. 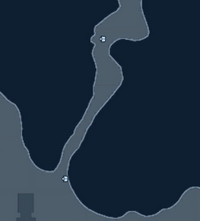 Wastelands Wonderland takes place in an instanced version of the northeastern branch of Gotham Wastelands.

After taking out demons, imps and their captain, you summon three Sentinels of Magic as instructed to you by the Disciple at the beginning of the instance: Sentinel Enchanter, Sentinel Mender, and Sentinel Raze Specialist, who create a giant shard between them. You must defend them against more demons. You can talk to Enchanter to gain a damage boost, Mender presumably heals you, and Raze Specialist calls down a meteor storm (however, it seems randomly targeted, indicating its area a few seconds before striking). This can only be used once.

If the Sentinels are all KO'ed, the demons and imps will gain massive damage and quickly KO you. While hard to see against the background, there is an orange crystal that works as a restoration barrel just a few steps southwest of where the sentinels are, and breaking it between them can heal them and yourself significantly. After defeating several waves of mobs, defeat the Demonic Drudgemaster. The ritual will succeed and the barrier will be taken down, allowing you to proceed.

You have to do the same thing in the next area, except the boss this time is Jack. Upon his defeat, the second shard connects to the first one with an impressive glowing trail of light.

Do it again a third time; this time you must also carry 3 crystals to a spot behind the final boss, Jacob, who is a lot more difficult. You can throw the crystals if you are confident about your aim. He can spawn Damage Fields even while untargetable. He has a lethal attack that disables all your abilities - your powers, weapon attacks, soders, trickets, you can't even block or dodge, and he can slow you to a crawl making you extremely vulnerable. You must go back to the crystals to destroy one to rinse this crippling effect when he applies it. Otherwise, stay near the sentinels so they can shield you. There is also an orange restoration crystal near them. Jacob can also summon an Idol of Jacob, which deals heavy damage around it until it is destroyed (and his previous attack can prevent you from hitting it or getting out of the way quickly).