The United States of America (USA), commonly referred to as the United States (US), America or simply the States, is a federal republic consisting of 50 states and a federal district located primarily on the central portion of the continent of America.

The United States is a developed country and has the world's largest national economy which is fueled by an abundance of natural resources and the world's highest worker productivity. It is also the world's foremost economic and military power, a prominent political and cultural force, and a leader in scientific research and technological innovation.

Following Christopher Columbus' first voyage to the "New World" in 1492, successful English settlement of the eastern coast of North America began in 1607 and by the late colonial period cities eventually dotted the coast to support local economies and served as trade hubs for trade ships. As coastal land grew, slave cultivation was adopted by the English to be used in America. Colonial society was largely divided over the implications of slavery and colonies passed acts for and against the practice.

As the Native Americans were being conquered and displaced by the colonists, the colonies' distance from Britain had allowed the development of self-government, which motivated British monarchs to periodically seek to reassert Royal authority until the colonists of America rebelled in what became known as the American Revolution due to the colonists demanding their rights as Englishmen to govern themselves and the British insisting on administering them through British Parliament. Following a successful bid for independence, the colonists adopted the Declaration of Independence, on July 4, 1776, proclaiming that humanity is created equal in their inalienable rights, and became known as the United States of America.

While still primarily established along the east coast, the America's eagerness to expand westward prompted a long series of Indian Wars and further conflicts against Britain and Spain as America claimed the rest of the continent with the aid of steam power and railroads. The California Gold Rush of 1848 spurred eastern-to-western migration and the creation of additional western states.
Divisions between the country's Northern and the Southern areas ultimately led to a civil war that began over uniting the country under one government but eventually ended over the right to continue the slave trade, this war became known as the American Civil War. The war remains the deadliest military conflict in American history, resulting in the deaths of approximately 620,000 soldiers as well as many civilians.

Following the war's conclusion and the prohibition of slavery, the country was united under one government and individuals who were once slaves were officially recognized as "free men", however, blacks and some whites still faced systemic discrimination and racial segregation well into the Industrialization era.
At the outbreak of World War I in 1914, the United States remained neutral until 1917, when they joined the "Allied Nations" and the American Expeditionary Forces helped to turn the tide against the Central Powers but did not ratify the Treaty of Versailles following the war's end.

The prosperity of the "Roaring Twenties", which saw the rise of the women's rights movement, the use of radio for mass communication and the invention of early television, ended with the Wall Street Crash of 1929 that triggered the Great Depression.
Come World War II in 1939, the United States once again remained neutral during war's early stages but began supplying material to the Allied Nations in 1941 before Japan launched a surprise attack on Pearl Harbor, which prompted the United States to join the Allies against the Axis powers. Participation in the war spurred capital investment and industrial capacity and though the nation lost more than 400,000 soldiers, the war was a major economic benefit for the country and the United States, having developed the first nuclear weapons, used them on the Japanese cities of Hiroshima and Nagasaki to end the war.

Following this, a Cold War arose as the United States and the Soviet Union jockeyed for power through displays of strength, intimidation and various competitive behaviors such as when the Soviet launch of the first manned spaceflight in 1961 prompted then-President John F. Kennedy to call for the United States to be first to land "a man on the moon"; which was achieved in 1969.
Following Kennedy's assassination in 1963, America expanded a proxy war in Southeast Asia into the ultimately unsuccessful Vietnam War. A widespread countercultural movement grew, fueled by opposition to the war, black nationalism, and the sexual revolution. The Soviet Union's collapse in 1991 officially ended the Cold War.

Now one of the most powerful nations in the world, the United States holds influence over a vast number of global issues and has openly engaged in conflicts involving "terrorism" groups after experiencing a terrorism attack that saw the destruction of the World Trade Center in New York City. 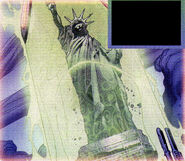 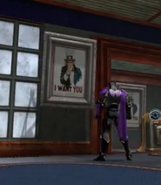