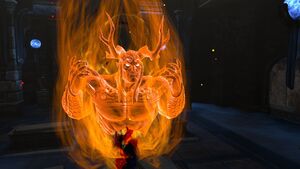 Other than through the On Duty menu, Trigon's Prison can also be entered directly from the Mausoleum Grounds in the center of Gotham Wastelands. 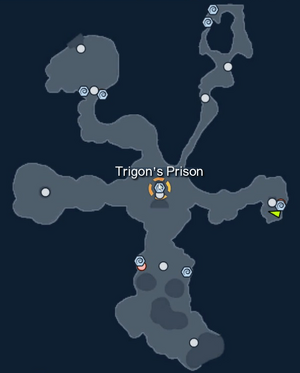 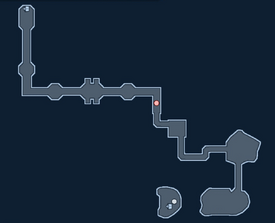 So far, I've seen Trigon's Prison drop lvl 84 armour and level 85 weapons. In the previously released T5 operations, Brothers in Arms or Family Reunion, only level 81, 82, and 83 gear and 87 trinkets dropped. So if you need a higher level trinket, try BIA or FR operations, because in Trigon I've only seen level 85 trinkets drop.

Trigon's prison usually drops between level 81 to level 84 armour for all roles and unattuned level 85 weapons in the end. Level 85 trinkets were the highest level I've seen which is weird because the level 84CR operations, BIA and Fam dropped the rare level 87 trinkets.

You're told to locate Trigon while Wonder Woman (heroes)/Circe (villains) will meet you there. Fight through the spirits and cultists. There is a distressed cultist hiding under the stairs, who will talk gibberish before running out of the Prison if talked to.

You run into a random Teen Titan (heroes)/Fearsome Five member (villains). Help them defeat spirits, talk to them then continue.

Eventually, Trigon's fiery image appears an proclaim he will soon be free. You need to defeat two Shades. They will drop a choice of several items, including two random pieces of level 84 gear.

There is a panicked cultist who, when talked to, tells you that Circe told him not to let anyone through, but he is terrified of the risen spirits and flees.

Fighting through spirits and demons, you run into another Titan/Fearsome Five. Assist them in taking down more enemies, then they would leave to hold enemies off in a different path. There is a terrified cultist who informs you the demons must be from Trigon's realm and he must be awakening before fleeing.

Go through a wall by carrying boulders out of it - and enter a more ominously reddish area and then face another image of Trigon who summons two of his sons. They also have drops of a choice of several items including 2 pieces of level 84 gear.

You will go pass a "window" from where you can see the heart of the prison where Trigon is - and there is a hysterical cultist who says it is not worth it any more and he wants out (but he does not flee like the others).

When you enter the first lava-filled room, Trigon summons the Avatar of Sin, who again has similar drops.

Enter Trigon's Chamber. You must defeat Circe (heroes) or Wonder Woman (villains). Trigon cannot be attacked, but he will still attack. Do not go near Trigon as his Hellfire Field in front of him will deal continuous damage as long as you are standing on it. After a while, Trigon will grab hold of your opponent (rendering them untargetable) while you have to defeat a wave of demons before they can be targeted again.

Upon Circe/Wonder Woman's defeat, Circe will still be able to charge the Victory Stone and plan to use it to start a war. The barrier will be raised again, keeping Trigon in a slumber.