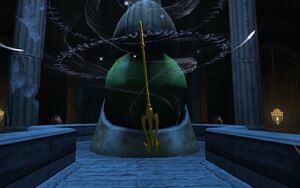 The Trident of Poseidon is a golden weapon endowed with the energies of Poseidon, Olympian god of the sea.

When Zeus, in preparation for his battle against Cronus and the Titans of Myth, freed the giants, Cyclops' and Hecatocheiroi from Tartarus, the Cyclops' forged weapons for the gods to use in the coming battle. For Poseidon, the cyclops' forged a trident of pure gold and later imbued it with the power of the seas following the gods' victory.

After Triton's second defeat at Aquaman's hands, Poseidon grew annoyed with his son's careless attitude and berated him in an attempt to make him realize his divine potential. However, the beration only served to anger Triton, who grabbed Poseidon's Trident stabbed him in the back, seemingly killing the Olympian and absorbing his powers as the new god of the seas.
Triton then proceeded to exact his revenge upon Aquaman, forcing the goddess Nuliajuk to mutate an aquatic dragon to enormous size and lying siege to Atlantis. Aquaman and an army of sea creatures arrived to confront Triton but the godling easily defeated the hero while the dragon destroyed the machination that kept Atlantis floating and submerged it beneath the waves again. Forming a plan, Aquaman goaded Triton into killing him, after which, in Tartarus, he saved Poseidon from Hades and the two returned to the living to face Triton. As Poseidon took back his power, Aquaman defeated Triton yet again before Poseidon killed Triton himself. He then gave his Trident to Aquaman, acknowledging him as his champion before leaving to mourn his son's actions.

Aware of the trident's seductive influence, Aquaman secured the weapon until the Imperiex War, when he was forced to use its power and seemed to vanish along with the rest of Atlantis in the aftermath.
With the guidance of Aquaman's protege Tempest, Wonder Woman tracked the trident to the other-dimensional land of Skartaris and discovered that the trident had been used by the evil Queen Clea to seize control of that realm. Reclaiming the trident after a pitched battle, Wonder Woman used it to disrupt the Trinity Virus that threatened to devolve the entirety of Skartaris and returned to Earth. 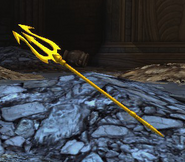 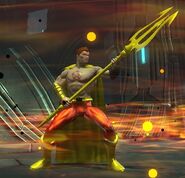