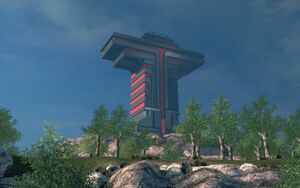 The Titans Tower is a T-Shaped steel and glass structure located just off San Francisco Bay in San Francisco, California, on Titans Island.

Built to act as headquarters and a place to retreat to for the Teen Titans, the Tower was designed and built by Cyborg. In exchange for performing various tasks, the city of San Francisco funded the tower's construction with the input of various people from Silicon Valley.