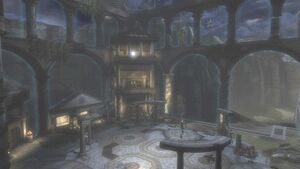 Home to the Amazons of Themyscira, Themyscira is an island archipelago blessed by the Greek goddesses. Meant as a place of refuge for the Amazons and a place of learning and peace, the island was initially isolated by a magical barrier that concealed the original island from outside eyes by a perpetual blanket of clouds and fog.

Standing as a doorway to the underworld, the island is a nexus of magic which Brainiac hopes to claim in his conquest of Earth and the Multiverse.

Originally city-state of Themyscira was a city found by the Amazons in ancient Greece, from which they practiced and spread their teachings of fairness and peace to the barbaric world. Ares, the God of War and a chief opponent of the Amazons, manipulated his half brother Heracles to gather forces and attack Themyscira. Through the fake show of friendship, his forces succeed in ransacking Themyscira and making the Amazons their slaves.

While the Amazons were eventually freed by the goddess Athena, the city of Themyscira was destroyed. Athena led the Amazons to a remote island where, as penance for their failures as teachers, they become guardians of Doom’s Doorway and charged with preventing the escape of the monsters beneath. Renaming the island paradise "Themyscira" after their fallen capital, the Amazons began their new lives, erecting buildings and monuments and perfecting their skills as artisans and warriors.

Remaining hidden from the world, the island and its inhabitants revealed themselves following the insistence of their princess, Diana; who was acting as an ambassador of sorts for the nation. Following its incorporation into the world, the island has seen several civil wars and attacks caused by outside forces, as well as the original island being sacrificed to save the world during a previous attack by Brainiac.

The second island, rebuilt and re-blessed by the goddesses, fell victim to one of Hera's fits before being politically bullied by the US government. Following a mass attack by Brother Eye and his OMACs during the Infinite Crisis, the island nation cut their ties from the world and retreated back behind its magical barriers.

Marked as a priority target by Brainiac following the Fortress of Solitude in digitizing Earth, the island of Themysicra comes under attack as Brainiac's Forces seek out the magical forces that lie beneath the island. Wonder Woman, Circe, and Exobyte Heroes and Villains must fight alongside with the Amazons and Circe's Bestiamorphs in order to stop Brainiac and the Avatar of Magic of getting The Flame of Change in the raid Themyscira: Gates of Tartarus, and to save Themyscira and the world itself. In addition to the On Duty menu, this scenario can also be accessed through the portal labelled "Themyscira" in the Magic Wing of the Watchtower and Hall of Doom. 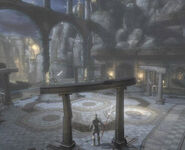