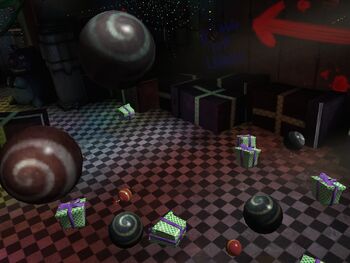 Seasonal themed instances of The Vault still might appear during seasonal events.

The Vault is a bonus instance, located in the Joker's Funhouse and accessible through the On Duty Menu after level 6. Players can access the Vault once during a certain period based on the type of account:

The Vault must be visited once to complete the Vault Ambush! mission.

Joker's Vault is filled with presents that fall from the ceiling over a short period of time. Breaking open the presents (with 1 hit each) earns the player a prize. Once all the presents are opened, the Vault run ends and the player is prompted to leave. There is no actual time limit, despite the Joker's taunting to that effect, nor does it require a cash payment. While the prize loot that appears is up to random chance, it is usually appropriate to a player's level. Above level 30 one Source Mark and one piece off Attuned gear are always received from two presents near the exit.

Balls of various sizes and bombs also drop randomly, causing some frustration as they push players around and obscure vision. Those were completely removed with game update 26 and slightly changed, reintroduced with game update 31. Now, the presents also can contain little Jokandroids, which mostly drop for Villain characters. 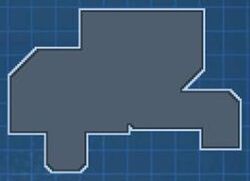 Every present will drop a small amount of cash depending on player level, with a small chance for Uncommon or Unique styles and an even smaller chance for a flavor trinket or other forms of currency.

All prizes can't be traded, sold and they are not account-shareable.

Clothing merchandise featuring a DC character's logo. Colors are locked, that is not changeable by the player.

The most common rewards aside from cash are various style items. These include:

The Greco-Roman style set is not longer available from The Vault.

Since game update 74, attuned gear drops in The Vault if you have reached level 30. The gear has the Psycho style (except for face, which has the Freaky Clown style) and the weapons come in the Maniacal Weapons Box. From game update 74 to game update 77 it had item level 10-172, then gradually upgraded from updates and currently it is at 10-280. You will usually get 1 piece of it from every Vault visit.

There are purple-quality gear drops that in addition to a unique style will also temporarily change a character's movement mode while equipped. However, the new movement mode will not have any skill upgrades.

Since the introduction of artifacts with game update 76 the Vault also provides Nth Metal including a bonus Augmented Nth Metal once per week.

Most of these are only cosmetic changes and have no practical uses. Transformations will last several minutes and can be removed by activating the trinket again. They will also override any active model changes, like the Doomsday form that players briefly acquire in Smallville Alert.

When players reach level 9 with any newly created character and after they complete the Reseach and Development mission, Ambush Bug will sent a consumable Vault Ticket to the player, which is included in the Vault Ambush! mission. When consumed, it will give the player a one-time extra visit to the Vault. This is currently the only item capable of doing this and is a one-time bonus for every character.

The Vault can be accessed through the On-Duty menu at any time, and you will be returned to the location you were at when you entered. 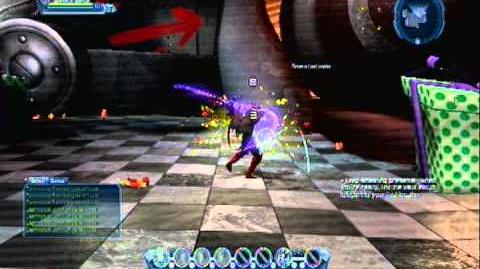 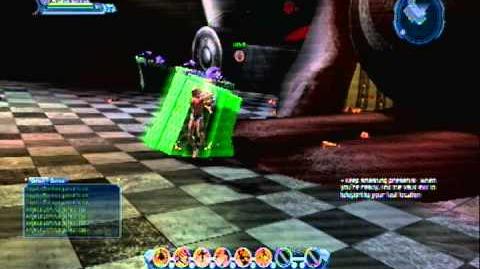