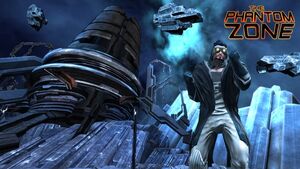 "Thanks for checking out the alert signal coming from the Fortress. I'd head there myself, but I'm trying to get to the bottom of Darkseid's plans. Anyway, we can discuss that later -- the readings are coming from the Phantom Zone Projector - head over there and I will check back in." — Superman

"Welcome back to the Fortress of Solitude! With Superman gone, you should be able to get acquainted with some intriguing Kryptonian tech. But I still get first rights on whatever you might find. My sensors are showing some anomalous readings emanating near the Phantom Zone Projector....but no risk, no reward." — Lex Luthor

The Phantom Zone is a Tier 3 4-player Operation in Episode 22 released in March 2016.

Access to the The Phantom Zone requires a Combat Rating of 100.

The Phantom Zone is part of Episode 22 together with The Science Spire Operation.

The Fortress of Solitude's defense systems are malfunctioning just as Superman is busy investigating an incredible off world threat. The source appears to be the Phantom Zone Projector! Superman needs trusted heroes to help check out the disturbance! Meanwhile Lex Luthor, having inserted listening devices in the Fortress during the Fortress raids long ago, is calling on villains to come play while Superman's away.

The enemy combat rating is 161.