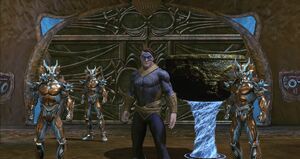 The Deluge is a xenophobic terrorist cell devoted to the preservation of the Kingdom of Atlantis' "pure" history and the destruction and eventual conquering of the "barbaric" surface world.

Led by the Atlantean Corum Rath, the group named themselves after the Atlantean armageddon myth "The Deluge"; a mythical "end war" where all that is will be drowned in blood following a great storm that will sweep the world away.
While the group see the Deluge as a cleansing force that will wash away the kingdoms of the surface world, Atlantean soothsayers state that, when the Deluge comes, it will drown the dry land and topple the towers of Atlantis as well, destroying everything.