The Death of Superman

The Death of Superman

The Death of Superman is Tier 9 playable content that contains the Doomed Metropolis open world zone (part I), the Doomsday raid (part II) and The Last Son of Krypton challenge (part III).

Access to The Death of Superman is free for all players. It was released as a celebration on the occasion of Superman's 80th anniversary and the release of Action Comics #1000.

"I wish I was contacting you under better circumstances, but there's a grave situation in Metropolis. Doomsday is back and worse than ever. My cousin Superman is taking him on, but needs help. The Justice League is off planet dealing with an emergency and all coms are down. While I try to locate them, can you head to Metropolis and back up Superman?" — Supergirl

"The situation is dire. I've been coordinating with S.T.A.R. Labs to maximize response times. I'll keep tabs on their progress if you can be my eyes on the ground. Go talk to their lead Researcher at ground zero." — Oracle

"H-hey. So, this is a little awkward, but lately, you villains have been willing to put our differences aside and work with us. I mean look at Lex and what happened on Earth 3! The fact is, we've got a nasty situation and things are getting desperate. Doomsday is back and he's rampaging through Metropolis. Superman's taking him on but he needs help. The Justice League is off planet and all their coms are down. I need to go find them. Could you lend us a hand?" — Supergirl

"What!? Now, Supergirl thinks we're a charity? That does it. I am done being made a fool of. Lex has gone soft -- he is a total embarrassment. It's time for a change of leadership. I have a plan. Meet the LexCorp Agents on MY payroll in Metropolis, and well show Lex, Goldilocks, and her boy scout cousin what evil really looks like." — Calculator

Doomsday is back and bigger than ever, and that's never good news for Superman. Luckily, this time he has back up in the form of exobyte-enhanced heroes, and based on how strong Doomsday is looking and the looks those exobyte-enhanced villains are giving, he's going to need it.

Doomsday has landed in Metropolis to wreak havoc on the city! Carrying a deadly plague with him, his very presence threatens the lives of all of Metropolis’ citizens. Superman has already flown to action with battling this giant menace, but Supergirl has requested your aid in supporting the Man of Steel and containing this deadly infection that Doomsday has unleashed on Metropolis!

Supergirl has asked for assistance in backing up Superman, who's locked in combat with Doomsday.

The Last Son of Krypton[]

Supergirl has asked for assistance in recovering Superman's body from the Phantom Zone.

The combat rating of the enemies is 247.

Note that all daily and weekly missions are only available after finishing the introductory missions (Doomed Metropolis Part 1 & 2, and All's Well That Ends Well). 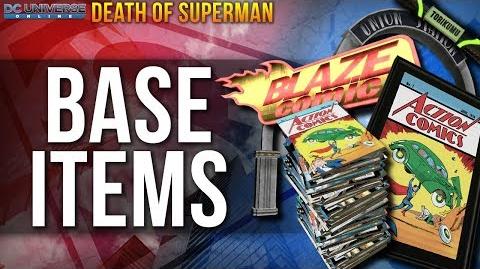 DCUO Death of Superman Base Items 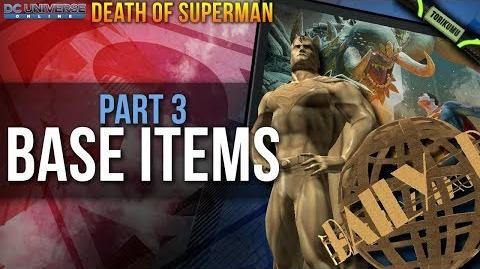