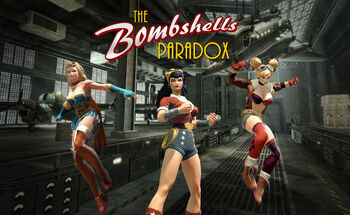 The Bombshell Paradox is a Tier 3 8 player Operation in Episode 15 released on August 5th for members and on August 12th for non-members.

Players travel through a rift in time and space to the world of the DC Bombshells to battle the "Bombshell" Talia al Ghul. In her attempts to alter their timeline and change the outcome of World War II, the Lady al Ghul has created a tear in reality that must be fixed! Players must stop her and set the universe back on its correct path.

The Bombshell Paradox is part of Episode 15 together with Corrupted Zamaron.

"The barriers between realities are weakening and certain aspects of reality are becoming affected. I need you to find the anomaly and repair the fabric of time and space." — Oracle

The enemy combat rating is 131.