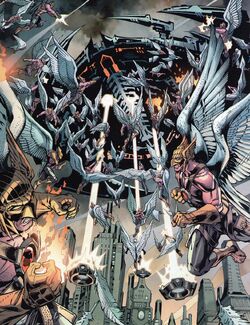 Thanagar is an expansionist civilization that plunders other worlds and revels in the experience of combat. In orbit around the star Polaris, the planet is the home planet of the Thanagarian Hawk-people who are noted for their affinity for violence and hawk-motifs. The civilization is also famed for its discovery and use of the gravity defying metal; Nth-Metal.

Millenia ago, Thanagar was a slave planet conquered by the Polaran Empire. Legend has it that a man known as Kalmoran freed his people with an army of a three thousand Thanagarians and drove the Polarans away. Using their ships, Kalmoran freed the other conquered planets and attacked the Polarans on their home planet. Afterwards, Kalmoran became ruler and was still honored as Thanagar's first and greatest hero.
As centuries pass, the Thanagarians began developing their own spaceships and exploring the galaxy. Ironically, they began conquering the planets they discovered; making them protectorates of the Thanagarian Empire and stripping the planets of their natural resources and treasures; bringing back a number of inhabitants to Thanagar as slaves.

Due to this, Thanagar evolved into a greatly divided society. The slave classes were cast down to the lower ghettos referred to as "Downside", while the Thanagarians lived in High Towers above where poverty, crime, and suffering were virtually unheard of while "Downsiders" die of starvation or disease that plague the lower levels.
Run by a single government called the Ruling Council, the society was without any specified need for a police force until a new alien race called the Manhawks instigated the practice of theft into the populace. As a result, Paran Katar established the "Hawk-Police" (or "Wingmen"). Amongst the first Wingmen was Paran's son, Katar Hol. Leading a colorful career, Katar and his partner Shayera Hol, were sent to Earth, where they served as goodwill ambassadors for their home planet following the "Invasion!" incident and remained for some time fighting both human and alien criminals; dubbed by the press as Hawkman and Hawkwoman during a time when the original Hawkman and Hawkgirl were trapped in Asgard with the Justice Society of America. While Thanagar later developed the Elite Hawkmen Force, an elite squad of Wingmen, the planetary government continued to be expansionist and eventually Hawkman and Hawkwoman claimed sanctuary on Earth.

In the Rann-Thanagar War, the planet's surface was devastated in a catyclysm after the leader of a rogue group of Thanagarians, during a battle with Adam Strange, teleported the planet Rann to the Thanagarian system, hoping to create a dictatorship between the two worlds. Believing that the sudden appearance of Rann had caused Thanagar's orbit to move closer to the sun where its surface was ravaged by heat, war erupted between the Thanagarian refugees and the Rannians.
During a battle between the factions, the forces of Rann and Thanagar were faced with a fracture in space that resembled those that were seen during the Crisis on Infinite Earths. It was later discovered that the villainous Superboy-Prime had actually forced Thanagar out of orbit and Adam Strange united the warring factions of L.E.G.I.O.N., Thanagar, Rann, and New Cronus into a combined force to make a full assault on the fractured rift, with Ion (Kyle Rayner) in the lead.
Green Lantern Corps members Kilowog and Kyle Rayner later re-terraformed Thanagar, making it again suitable for habitation.