Team Superman, also known as the Superman Family, is a loose group of super-powered heroes who have found inspiration in wearing the "S-Shield"; Superman's iconic emblem.

The group has been a driving force for saving the world alongside their leader, Superman, for many years; following their leader in setting an heroic example for other heroes to follow. The team's prime directive is to help Superman in any dire situation where help is needed, and to also fill in for Superman if he is absent or ill.

Members of the Superman Family appear frequently throughout the game in many capacities, handing out missions to players who have created hero characters, and often teaming up with new heroes, or battling new villains. Superman related heroes seem to be found only in Metropolis, or in the Meta Wing of the JLA Watchtower; the assigned wing for all heroes mentored by Superman.
Excluding Steel, who can be found in the Tech Wing of the watchtower selling an Iconic Battle Suit to Tech heroes. 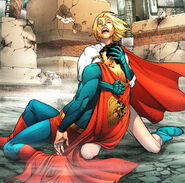