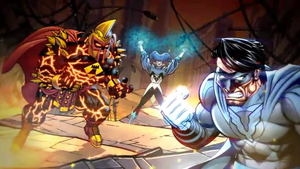 A Team Role, or Combat Role, is a "battle mode" that boosts specific combat attributes for your character and group.


A player will always be in a Role, the default and starting Role being Damage. The other Roles are Tank, Healer, and Controller, available to players with certain powers at level 10 and above.

A player may change their current Role when out of combat, by pressing the "T" key. On the PS4 or Xbox One this can be achieved by pressing "UP" on the D-Pad and selecting change role.

Certain pieces of equipment require the Player to have a certain Role available for them to be equipped. That does not need to be their current role - for example, an Ice player, who could change to the tank role, could wear an item requiring tank role even when they are in damage role.