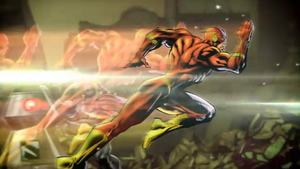 Chosen during Character Creation as a character's Movement Mode, Speedsters travel through the streets at an incredible velocity. Those with Superspeed movement reach such tremendous acceleration that they can run up the sides of buildings, up walls or across ceilings. Traveling long city blocks to get to the action becomes a cinch with this movement mode.
A character is able to run around at blazing speeds and jump great distances when using the sides of buildings. A character can enter Super Speed mode by pressing "F" on the keyboard. In order to use the super jumping, the character must be running up the side of a building and pressing Jump.

There is also another ability purchased that transfers downward momentum into forward momentum while falling, which enhances the Super Jumping ability.

Race up and over any surface, dashing into the midst of combat.