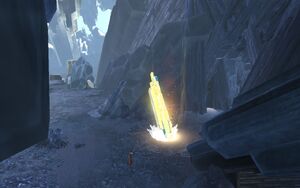 Sunstone Crystal is a type of crystal first developed and used on the planet Krypton, both as a building material and as a form of computer system.

Similar in nature to organic lifeforms, a sunstone crystal can be "shaped" to serve specific purposes. Some, when activated, can duplicate their mass; forming structures such as buildings or vehicles. Others shape themselves into hive-like nests to act as computer systems. While others again can serve as small communicative devices or tools and instruments.

Upon their discovery on Earth by Lex Luthor, who had found a Kryptonian Sunstone Warship and had attempted to destroy Metropolis with it, Superman disassembled the ship and inadvertently created a new Fortress of Solitude with one crystal.
Keeping the remaining crystals within the fortress, Superman continues to study their natures while determining how their use may benefit Earth and human-kind.