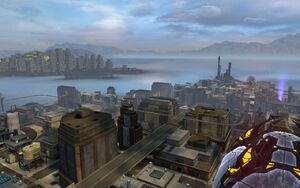 The downtrodden end of Metropolis, Suicide Slums contains the Steelworks; factory of various technologies and homebase of Steel, and the Ace o' Clubs; a public watering-hole for information.

Originally known as Hob's Bay, named after Elias Hob; an early Metropolis landowner, the area had been a prosperous, middle-class neighborhood at the turn of the twentieth century. With the beginning of the Great Depression, residents were encouraged to invest in Comet Arena, touted as a sports venue that "would bring fifty thousand people to the area every week of the year." Instead, the developer disappared with the contributed donations earmarked for the complex and the area began a descent into poverty and decay from which it never recovered. Now only City Hall and the chamber of commerce refer to the neighborhood as "Hob's Bay". To the rest of Metropolis, it is Suicide Slums.

Left largely untouched by the factions warring over the Exobytes, the district is instead under attack from a surprise invasion by the Kingdom of Atlantis, who intend to conquer the surface world as petence for the atrocities the surface world has committed against the ocean. 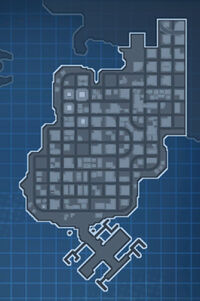