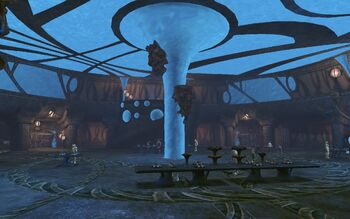 Starro: Spindrift Station is an 8-player raid in the Deluge episode.

The Spindrift Station is an Atlantean Dry Land Embassy built on the shoreline of Massachusetts. As an Atlantean embassy the station is a personal project of Aquaman's who intended to improve relations between the sea kingdom and the surface. 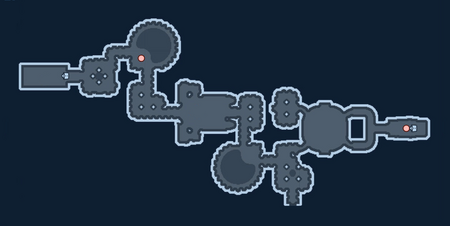 When you first get into the raid, you must first speak to Mera. She will tell you to enjoy the gala and then talk to her when you're ready. After a conversation between her and Aquaman about the Starro attacks, Black Manta suddenly appears and states that it is time for him to end Aquaman once and for all. This is where you will take on Black Manta. Sometimes during the battle, he will plant mines and you will be instructed to break a chain reaction that will be caused by them. If you fail, you will be KO'd instantly, regardless if you're a tank or if you have a shield on you.

After you defeat Black Manta, Corum Rath suddenly appears and states that the people of Atlantis demand change, and he is that change. He plans to destroy Spindrift Station, and you must stop him. You must get through waves of enemies, and then come across a flooded room. One of the players must drain the flooded room to continue. During that time, your oxygen supply will drain. If it is completely drained, you will be KO'd. Brine creatures will also appear and try to slow your progress.

After you drain the room, you must take on more waves of enemies, and then you will be at the end of the raid. Corum Rath summons the rogue water elemental, Morgwar. He then escapes and leaves Morgwar to deal with the players. You must defeat Morgwar to finish the raid.

After you defeat Morgwar, Mera instructs you to leave Spindrift Station, as it is collapsing in on itself. She also states that she will go find Aquaman and right after she states that, Aquaman appears. He also tells you to leave, and the raid ends.