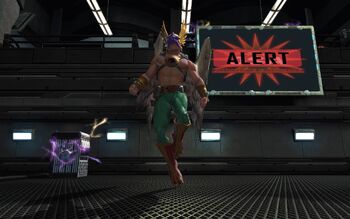 Starro: Invasion! is a 4-player alert in the Deluge episode.
Access to the instance requires a combat rating of 210. The alert rewards 5 Source Marks.

The alert actually takes places in different locations one of which is chosen randomly.

Starro has taken control of heroes and villains alike, and is forcing them to do his bidding. Put a stop to Starro by rescuing those under its influence.

The enemy combat rating is 235 for the episode and 220 for the accompanying event.

Fight through waves of controlled S.T.A.R. Labs officers and, in the final room, defeat Controlled Superman, Controlled Cyborg, Controlled Supergirl, Controlled Professer Zoom, or Controlled Martian Manhunter, then teleport him/her to S.T.A.R. Labs for Starro Removal. In the room of the final fight there are little unnamed Starro lying on the floor. Getting in contact with one of those will make the player character mind-controlled. There are three consoles in the room which can be used and which will clean an area around them of those Starro. The platform where the iconic boss spawns on cannot be cleaned.