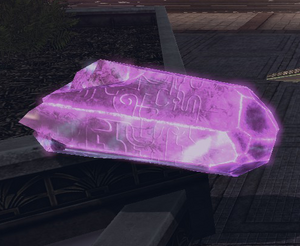 The Star Sapphire Crystal is a sapphire coloured crystal originating from the planet Zamaron that possesses parasitic abilities.

The original crystal was found by the immortal Zamarons within the planet's caves between a pair of mummified bodies of Khu-Fu and Chya-ra. Concluding that the gem was the ultimate expression of love the Zamarons sought to emulate it but failed to fully realize that the Sapphire was a parasite which suppressed its host's inhibitions.

Splitting the crystal into five gems, the Zamarons took to bestowing the crystal, upon various women in the universe to act as their representative "queens" known as "Star Sapphires". One of the first humans to be chosen as a "Star Sapphire" was Carol Ferris, who felt attracted to the residential Green Lantern, Hal Jordan, but was forced to aggressively attack him due to the gem's influence. As Jordan continually managed to defeat their "queen", the Zamarons eventually forced him to choose which would be the Sapphire's new host: Carol Ferris or his then-current girlfriend; Jillian Pearlman. Instead, Hal kissed one of the Zamarons, which the Sapphire immediately bonded to in the assumption that that was who he had chosen.
Realizing that the crystal was too unstable to be controlled on its own, the Zamarons attempted to lessen its power by reforming the five gems into a single crystal and installing it into a Power Battery to form their own corps in preparation for the coming War of the Light.