Stagg Enterprises is a research and development firm and multinational corporation responsible for pioneering new, innovative methods in the fields of engineering, chemistry and genetics. Stagg Enterprises has various subsidiaries; including but not limited to Stagg Industries, Stagg Mining Company, Stagg Cruise Lines, Stagg Stop and Stagg Robotics.

Founded by amoral billionaire and genius scientist Simon Stagg, Stagg Enterprises has known offices in New York, Los Angeles Gotham City and Metropolis as well as various factories and laboratories around the world.
A jealous and controlling man, Simon uses his business to concoct various schemes to keep his daughter, Sapphire Stagg, and her lover, Rex Mason, apart. However, when Rex was turned into the Metamorphae hero known as Metamorpho, Stagg turned him into a puppet and used him as an enforcer and asset for his company. Following Rex's leave of the company, Stagg attempted to transform an architect under his employ into a second "Metamorpho" to replace the original but fails. 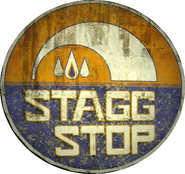