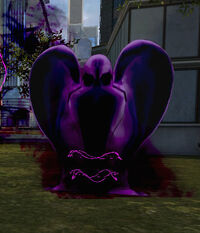 The Soul-Self is a spectral avatar used by Raven as part of her demonic heritage. The avatar, most commonly seen in the image of a giant raven, is a part of Raven's soul which she summons through a form of astral-projection.

Raven can project her Soul-Self as a black form of spectral energy for limited periods of time. This energy form can be used by Raven to aid her in battle and can function as a pocket of inter-dimensional space; which she most commonly uses to envelope and teleport numbers of individuals to alternate locales.

The Soul-Self can travel through any physical material and can even traverse time and space. It can also act as Raven's eyes and ears when away from her body.
While essentially an extension of Raven, in some instances the Soul-Self has been shown to act on its own accord, acting as an automatic defense for Raven when she is overwhelmed as well as running rampant across the world during the times when Trigon has gained influence over her.