Soder Cola is a popular cola drink franchise in the DC Universe most known for their eternal rivalry with Zesti Cola, an addictive cola alternative.

Soder colas heals and restores power with varying amounts depending on type. Many vendors sell them. Two of the same type is a common reward from side missions. Mobs also uncommonly drop them according to the mob's level, meaning that high level mobs drop high-quality soder cola. 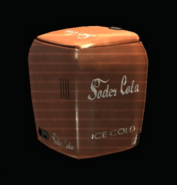