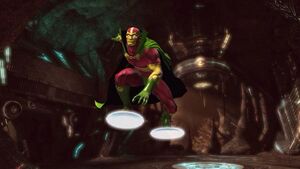 Skimming is an aerial movement mode variant introduced in game update 42.
Skimming and flight share the same races, feats and trophies. Flight and skimming also share the same use of all their abilities, instead, for skimming some of the abilities were renamed to match its theme.
Inspired by Mister Miracle, skimming is flight with the character supported by two discs. The color of the discs is based on your primary color selection.

Skim amongst the clouds and deal punishment from above.

Question: How do I get Skimming?
Answer: There are two points to be aware of. To begin Skimming around DCUO, you'll need: access to the feature, and to apply it to a character.
All Members will automatically have access to the Skimming game feature, just like they automatically gain access to new DLC content when it goes live. Non-Members will need to purchase Skimming on the Marketplace, either from Character Create or from in the game.
Once you have access to Skimming, you can create new characters that use Skimming by simply selecting Skimming during Character Create. You can change an existing character to use Skimming by using a Movement Respec Token available in the Marketplace.

Question: How much does Skimming cost?
Answer: 500SC/MC for Non-Members.
Members have access automatically.

Question: What is the difference between a Movement Mode and a Movement Mode Variant?
Answer: A movement mode is the highest level of organization for movement in our game. The original three movement modes (Flight, Superspeed, and Acrobatics) are being renamed. The Flight movement mode will now be called Aerial. A movement mode defines the physics of how a character moves and what traits and abilities are available to learn. Races scattered throughout Gotham City and Metropolis are defined for each movement mode, and you can earn Feats and Trophies based on completing races and having certain level characters of a particular movement mode.
Movement mode variants determine how a character looks and animates while in their movement mode. For now, the Aerial movement mode will have two variants: Flight and Skimming. Flight will animate pretty much exactly like you are used to, with the character facing the direction they are traveling with an arm stretched out. Skimming will animate with the character supported by two discs, so they will stay on top of the discs no matter which direction they fly. There are also entirely new animation states for Skimming; for example, there are new left and right turning animations that look a bit like your character is dashing through the air.

Question: If I already have the old Flight Feats, can I earn new Feats for Skimming?
Answer: No, the Flight and Skimming variants share the same Aerial Feats, races, and trophies.

Question: Has Flight changed at all?
Answer: As much as possible, I tried to not change Flight while implementing Skimming, but because the two variants do share code, you may notice a couple of situations where a Flight character's orientation is different than before. For example, a Flight character should look better when holding down the jump button.

Question: Does Skimming have a different Trait tree?
Answer: No, the Skimming and Flight variants share the same Aerial Traits and abilities; however, some of the abilities for Skimming have visual changes. Compared to the Flight version, some of the Skimming abilities have new names and new animations, but functionally the two are the same.
For example, the Flight skill Air Burst is being renamed to Cyclonic Burst for Skimmers. When performing Air Burst, a Flier spins, rotates 360 degrees clockwise, and jumps up all at the same time. When performing Cyclonic Burst, a Skimmer does a 1080 degree counter-clockwise orbit. Both Air Burst and Cyclonic Burst do damage and knock down enemies.

Question: Can I change the color of the Skimming discs?
Answer: Yes, the discs will use your character's primary color selection. 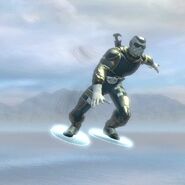