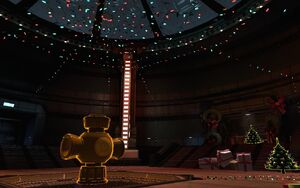 The Secret Research Facility is a level 10+ 4-player seasonal alert in the Winter Holidays event.

Playing this instance will grant an extra mission and reward if doing it as part of the event's mission chain.

"Larfleeze has locked himseif behind a security door. The excess energy in the building has shorted out the locking mechanism... Give it a good whack and you should be able to get inside! [...] Use those shielded constructs to disrupt the energy beams from each emitter. That will temporarily disable the shield that's protecting Larfleeze." — Oracle

"Ah, there you are. Larfleeze is holed up behind a security door, but all the energy inside has shorted out the locking mechanism. Bust open the lock and get inside! [...] Use the shielded constructs to disrupt the energy beams from each emitter. That will temporarily lower the shield protecting him!" — Calculator

Larfleeze, the ring bearer of the Orange Light of Avarice, has stolen Power Rings and is hoarding them inside a secret research facility. 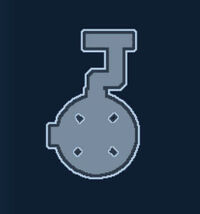 Four Orange Lanterns will appear, one in every corner at the pylons where the power rings are caught. Once an Orange Lantern is defeated, there will be an orb with a timer. This orb must be carried to the correct pylon - indicated by an arrow - before the timer expires. The correct pylon is the one where the Lantern now caught in the orb appeared at. If the timer expires before the orb shuts down the pylon a Snowman construct and another Orange Lantern will appear and you will have to start over.

After all four Orange Lanterns and the four orbs have been dealt with, Larfleeze will join the fight. However he cannot be defeated at this time. After his health has been lowered, he will retreat, reset the pylons and four new Orange Lanterns will appear.

This must be repeated two times - three rounds overall - until Larfleeze joins for the final fight.

In the final fight Larfleeze must be and now can be defeated. Every now and then christmas presents with a timer will drop from the central power battery. One of those presents must be thrown away - indicated by an icon only showing after using the presents. If the timer expires before that present is thrown away the power battery will overload and additional enemies will join the fight.

Doing this alert after the seasonal open world mission Season's Greedings will trigger an extra mission (Ring in the Holidays) which will award an additional 6 Holly Leaves. 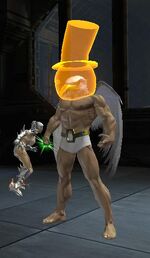 Formerly while players of any level could enter the instance, if they were below a certain level they would be given a power boost while within the instance to stand a fighting chance. This power boost was visually represented by a orange-lantern "snowman head" construct around their heads..
This was changed when the seasonal instances where raised from level 5 to level 10. While there still may be a stats boost, the visual indicator has disappeared.