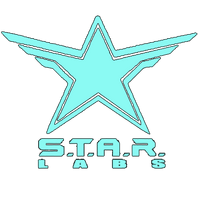 The Scientific and Technological Advanced Research (S.T.A.R.) Laboratories is a scientific research organization that spans the globe.

Founded by scientist Garrison Slate, who used his scientific intellect to create a nationwide chain of research laboratories devoted to the study of sciences unconnected to the government or any business interests.
Slate assembled a celebrated team of scientists and researchers who were feeling under-appreciated or under-funded at other companies. In time, S.T.A.R. Labs opened up a dozen facilities stretching from one coast to the other. To fund their work, the team licensed out their inventions to countries around the world and Slate was eventually able to expand the corporation on an international scale, with S.T.A.R. Labs currently maintaining facilities in Canada, Europe, Australia, and Japan as well as continuing to run the many already established branches within the United States. S.T.A.R. Labs' central branch is located in Metropolis.