Rise of the Bat 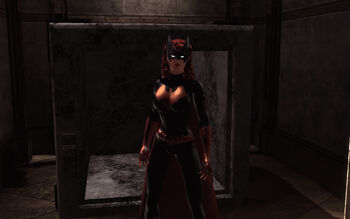 Rise of the Bat is a Tier 4 4-player operation in Riddled with Crime released in September 2017.

A WayneTech warehouse is being robbed as the Gotham Gang War spreads further into Gotham City. Any Gotham Gang that obtains technology from WayneTech will surely gain the upper hand. Prevent the shift of power by stopping the theft or by stealing it yourself.

"Ah, the charming sound of klaxons. It gets your blood pumping, yes? You'll likely find common thugs in here trying to curry a favor with one of the gangs. Whatever they're after, we shall take." — Talia al Ghul

A break-in at WayneTech will lead to more clues about what really lurks in the shadows, and now it's a race against time - back to the Batcave. All of the mysteries behind this gang war will soon be revealed. Whoever controls the technology of WayneTech will surely prevail in this deadly game of chess. Prevent the shift of power, and find out what mysteries lurk behind this gang war.

The enemy combat rating is 209.

Stop the burglary at WayneTech as you battle through League of Assassins and security drones.

Talia al Ghul steals something from the safe and takes over Batcave. You need to fix three turrets - each by damage them, then fighting off mobs while Batwoman regains control over them. The turrets take down the shield around Talia and the Batcomputer, but she unleashes Man-Bat against you.

The story of this alert leads into Gotham City Zoo.