Proving himself in combat time and again and eventually become one of the world's greatest detectives, even helping in the formation of hero groups such as Young Justice and the Teen Titans, as a member of the Bat Family Drake continues to use his considerable intellect and deductive prowess to serve the fight for justice in Gotham City.

In the aftermath of a terrible Crisis, Batman was thought dead at the hands of Darkseid, who seemingly killed him with his Omega Beams. With Gotham falling apart, Nightwing took up the Mantle of the Bat while Tim Drake temporarily took up the mantle of Red Robin. However, Tim discovered evidence that Batman wasn't dead, but instead being tossed through time. Between no one believing him and Dick relinquishing the title of Robin from Tim to Damian, Tim grew angry and began a globetrotting adventure to find evidence to back up his claims. His adventures would lead him to not only find that evidence, but stop Ra's al Ghul from taking over Bruce Wayne's possessions, acts that brought him back into the fold in time to help rescue Bruce from the trap Darkseid put him in. 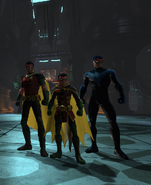