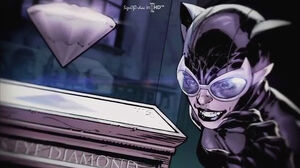 Rarity denotes the worth and difficulty of obtainment for items, armor and weapons in DC Universe Online .

Based on a colored tier system, each obtainable item in the game has an icon that identifies the item and its rarity.

White denotes poor items that do not have a particular rarity as they are easily available as Vendor Junk.

Light blue denotes common items that do not have entry level rarity as they are easily available as loot drop or purchasable vendor items. Most weapons and gear at the beginning of the game are of common rarity.

Gold denotes legendary items. These are special items gained through The Vault, Promethium Lockboxes, Powerful end level Bosses and Special Promotions. These items are, except for styles and base items, untradable and are currently the rarest items to be found.

Yellow denotes Marketplace items which can be found and obtained only from the Marketplace. These items usually are account bound, meaning they can be traded only to other characters of the same player account.