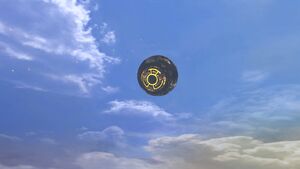 Ranx the Sentient City is a sentient planetoid constructed entirely from technology. A member of the Sinestro Corps, Ranx nurses a deep-seated hatred against the Green Lantern Corps for previous slights the corps has made against it.

According to folklore, Ranx is as old as the stars. In ancient times, Ranx was located at the crossroads of trade routes located in Space Sector 73. A thriving port, Ranx eventually grew greedy and fed upon the lives within it, growing hungry for more inhabitants. Crime and vice took hold among the population until the city itself became a source of evil.
The Green Lantern Corps had to shut the port down for the good of the sector. When the trade routes were diverted, Ranx became no more than a deserted husk. Over the eons, the port drifted into a backwater nebula and was all but forgotten, but Ranx would never forget what the Corps had done, with its only inhabitants becoming simple criminals and drifters with nowhere else to go.

In the early 21st century, a member of the religious cult known as the Children of the White Lobe abducted the daughter of a politician from one of the worlds in the Mytonian Cleft. Green Lanterns Chthos-Chthas Chthatis and Guy Gardner tracked the kidnapper to Ranx. The port's long hatred of the Green Lantern Corps had not abated and Ranx brought the very ground to rise against the ring wielders in the form of a giant humanoid. When that attack failed, Ranx tried to block their way with gravitational distortions. Finally, the Green Lanterns threatened to disconnect Ranx from its data feeds. Unable to fend them off, Ranx did not prevent them from locating the lobe-spawn.
When Gardner and Chthos-Chthas Chthatis cornered the fugitive, she unleashed a powerful "Blink Bomb" that caused Ranx to void its digestive system, expelling the Lanterns into space and humiliating the sentient city greatly.