DC Universe Online Wiki
Register
Don't have an account?
Sign In
Advertisement
in: The Battle for Earth, Origin Crisis, Halls of Power Part I,
and 24 more 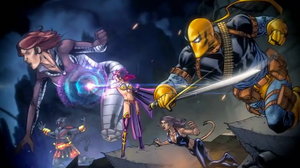 Raids are instanced locations where 8 players come together to take on the challenges of the raid. Raids yield powerful equipment and a large amount of marks and episode-specific currency but have a very high difficulty.

In order to enter a Raid, players must queue up using On Duty Menu (Default PC Key 'Y'), and choose appropriate roles they wish to fulfill. They will then be placed in a queue that searches for other players who wish to do the same raid, and be prompted to enter when an instance is available. It is also possible to use the entrance portals. Raids take teamwork and require 8 players.

Raids are only accessible once you hit level 30 and additional Combat Rating requirements must be met.

Some raids feature treasure chests, though in some cases accessing those might require doing a feat.