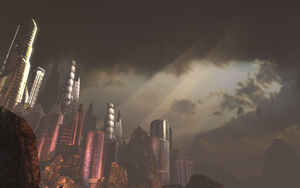 Qward is a planet in the Antimatter Universe; a universe in the Multiverse where evil always triumphs over good. The antimatter analogue of Oa, Qward is located at the very center of the Antimatter universe.

Once used as the location where Sinestro was exiled to by the Guardians of the Universe, Sinestro had the Weaponers of Qward form a yellow lantern Power Ring for him to wield before conquering the planet to use as a home-base for his Sinestro Corps.

When the most powerful being in the Antimatter Universe, the Anti-Monitor, was born on one of the moons of Qward, and he created a race of warriors known as the Thunderers of Qward.
The most capable members of the Thunderers were transformed into two-dimensional beings of pure shadow, and functioned as the Anti-Monitor's personal elite force in his battle against the Monitor. Following a final battle between the two monitors that left both combatants comatose, the Thunderers maintained their militaristic might for eons, with many of their numbers becoming weapons-smiths skilled in the creation of weapons and devices of mass destruction. These smiths became known as the Weaponers of Qward.

The Thunderers worked alongside the Weaponers for many years until a schism erupted within their ranks. Near the end of the civil war, Irik Roval, leader of the Thunderers, staged a coup against First Weaponlord Varnathon of Q'Uld and united the Weaponers and Thunderers as the Highlord of Qward. Roval then located the Void Hound; an ancient weapon developed by the Qward that was buried due to its destructive properties, and piloted the weapon through an portal into the positive matter universe in a bid of multiversal conquest.
Though Roval was eventually forced to retreat by the Justice League of America, Qward remained a potent threat to the positive matter universe.

When the deposed Green Lantern known as Sinestro was exiled to the Antimatter Universe, Sinestro took control of a group of Weaponers and had them a fashion a new Power Ring to use against the Green Lantern Corps upon his return to the positive matter universe.
After being capture once again and having survived his apparent "death" at the hands of Parallax (Hal Jordan), Sinestro returned to Qward and destroyed the Thunderers of Qward before enslaving the Weaponers and forcing them to mass produce yellow power rings to outfit members of his own Sinestro Corps.