Psimon was once a physicist until he was corrupted by the demon Trigon, now he is an arrogant, power-hungry sadist, who possesses powerful telepathic and telekinetic abilities.
With his telepathy, he can read minds, control beings to do his bidding, cast telepathic illusions and possesses advanced telekinesis and an enhanced intellect, all for the sole purpose of causing as much fear and pain in the world as possible.

Physicist Simon Jones was working on experiments in contacting other dimensions when he was contacted by the demon Trigon. Trigon transformed Jones into a powerful psychic with telepathic and telekinetic powers, and gave him the mission to destroy the Earth.
Finding an ad by the supervillain Doctor Light, Jones, now calling himself Psimon, joined Light’s new group, the Fearsome Five. Psimon usurped Light’s role as the team’s leader and attempted to influence the Teen Titans into killing the Justice League of America, however, the plan failed and the Five were defeated.

Trigon, growing impatient with Psimon’s lack of progress, banished his minion to another dimension. The remaining members of the Five attacked the Titans at their new headquarters and used their dimensional transmitter to return Psimon to Earth, but they were subsequently imprisoned.

Gizmo eventually broke the team out of prison and Psimon led the Five in kidnapping Dr Helga Jace in order to force her to make them an army of "Mud Men" to aid them in their battles. However, they were again defeated, this time by the combined forces of Batman, the Outsiders, and the Teen Titans.
Psimon later allied himself with the Monitor during the Crisis on Infinite Earths. The rest of the Five, feeling betrayed by Psimon, turned on him. During the crisis, Psimon confronted Brainiac and the Lex Luthor of Earth-1, who were attempting to take over the Earths after the crisis, while attempting to stop them the duo killed him.

Following the timeline restoration, Psimon turned up alive, cutting a swath of destruction through another star system far from Earth, he returned to Earth to seek revenge on those who had wronged him.
Finding his former teammates Mammoth and Shimmer at a Tibetan monastery, having renounced a life of crime, he attacked and killed them. Shrinking Gizmo to subatomic size. He then attacked and psychically tortured the Teen Titans, but was defeated and placed in the custody of the interstellar police force known as the Darkstars.

Psimon later joined with Doctor Sivana, who freed a resurrected Mammoth, Gizmo, and Jinx from prison. Despite lingering animosity between Psimon and Mammoth, Sivana put the team to work for him in a scheme to short sell Lexcorp stock by having them steal its accounts from its corporate building in Metropolis, and then driving down the stock by killing all the people in the building, and destroying two other Lexcorp properties.

At the latter of the two, a microchip processor factory of Lexcorp's subsidiary, Kellacor, the Five were confronted by the Outsiders. After escaping, the criminally unsophisticated Five urged Sivana to take Lexcorp's nuclear missile facility near Joshua Tree, California. When Sivana refused, Psimon asserted that they would take it anyway, and in response, Sivana nearly killed Gizmo and severed relations with the remaining four, warning them that he would kill them if they ever crossed his path again. The Five decided to initiate the plan themselves, but were defeated in their plan to take the facility and fire a nuclear missile at Canada. Mammoth was returned to the metahuman prison on Alcatraz Island, but Psimon and the others remained at large. 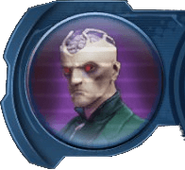