Made of depleted promethium and highly encrypted, this lockbox can only be accessed by Legendary members. Alternatively, Promethium Keys, which contain volatile promethium, can be used to destroy the lock and bypass the encryption.

Promethium Keys are available for purchase in the Marketplace.
Item ID: 1903296

A Promethium Lockbox is a legendary box item dropped randomly by any enemies or players defeated by the player in any instance once they reach level 10.

With each lockbox made from Depleted Promethium, a metal invented and patented by Steve Dayton of Dayton Industries, the lockbox can only be opened through the use of specialized "keys" that contain a chemical known as Volatile Promethium that can eat through the lock.

Starting April 3rd, 2012, once opened the player will be rewarded with a unique consumable item or armor style piece that can only be found within Lockboxes. Due to the unstable nature of Promethium, the player will have 30 days to open a Lockbox before it degrades beyond use. The box's status can be checked by checking the tooltip on the Lockbox in the inventory.

Game update 26 reorganized the content to be found in lockboxes completely. Now style items and exclusive base items will be contained.

Additionally a Mark of Victory can be found in each box.

Since Hotfix 22/07/15 Promethium Lockboxes feature a Loot Picker, as well as the first time faction-only vendor styles can be obtained cross faction.

Since Hotfix 22/07/21 Promethium Lockboxes do not drop for players with a free or premium account anymore.

For an overview of those please see Promethium Lockbox - Former Items. 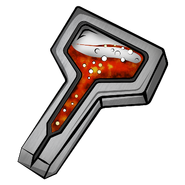 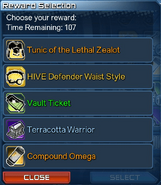