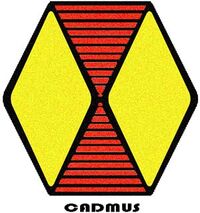 Project Cadmus is a scientific research group primarily known for its achievements in genetic engineering and it's human cloning capabilities.

Possessing wavering connections with the United States of America, the center's more notable creations include the Guardian (a clone possessing the original mind of the mystery man Guardian, who operated during World War II as a reserve member of the All-Star Squadron), Dubbilex (a D.N.Alien creation and extremely powerful telepath), and Superboy (a genetic clone combining the DNA of Superman and Lex Luthor).

Originally named the "DNA Project", the Project was founded by Dabney Donovan, Reginald Augustine and Thomas Thompkins, with their facilities constructed within an abandoned aqueduct outside of Metropolis. Exploration soon uncovered a vast array of caverns close to the facilities.

While Donovan was ultimately fired from the Project due to his lack of ethics in regards to his work; believing that there should never be limits like laws or "human rights" when experimenting with the human genome and understanding the potential of the genetic code, he is responsible for creating the "Hairies"; a group of mentally enhanced hippies who developed a unique habitat that blended science and nature, the "D.N.Aliens", genetic experiments created from the combination of human and alien DNA, as well as various normal clones, including clones of the Guardian and the members of the Newsboy Legion, and miniaturized monsters based on his favorite horror films.
Donovan was also responsible for the creation of CADMUS' competitor, the Evil Factory, through the creation of and continued experimentation upon the genetic beings "Simyan" and "Mokkari". Due to the level of cruelty of the experiments Donovan subjected them too, the duo developed a great deal of hatred towards all humanity and, upon their escape, they formed a scientific enclave called "Brigadoom" for the purpose of creating an army of monstrous genetic constructs to take over the world. Coming to the attention of the New God, Darkseid, the pair were given vast resources to start up their own genetics facility, dubbed the "Evil Factory", to assist Darkseid in mastering the Anti-Life Equation.

Following the Crisis on Infinite Earths incident, the Project was renamed Project Cadmus; after the legend of the Greek prince Cadmus, who created warriors from the teeth of a dragon, and Paul Westfield became the Executive Director of Project Cadmus; with the clones of the Newsboys Legion acting as shadow Directors within the Project.
When the Guardian, who was now the Project's head of security, fought the vigilante Gangbuster (who was revealed to be an entranced Superman), he reported his encounter to Westfield who summarized that Superman was a potential threat to Earth. Devising Project: Bloodhound as a countermeasure against the hero, Westfield monitored Superman for months and after incidents involving the Krypton Man, Westfield was convinced that Superman's mental state was deteriorating.
Capturing the hero, Westfield had Superman's thoughts transferred to a computer to find evidence to file a congressional report against him, however, Superman was rescued by the Hairies soon after thanks to Dubbilex and Guardian and the computer and its files were destroyed.

After Superman's death at the hands of Doomsday, Westfield wanted the Project to create a cloned replacement for the fallen hero. Stealing the hero's body from its tomb, the original plan to clone Superman via a DNA sample was unsuccessful due to all cloning techniques proving useless in replicating his Kryptonian genetic code. After the clones of the Newsboys Legion had Superman's body put under an electron capillary scan and formed an approximation of his genetic code based on educated guesswork, Westfield sends a personally created Guardian-clone called "Auron" to retrieve the code by force; attacking both the clones and their "fathers", the original Newsboys Legion. Following this incident, the adult Legion openly defy Westfield and ponder quitting Cadmus.
After the lose of the code, the refusal of the other directors to make a new scan and the retrieval of Superman's body by Lois Lane, Supergirl (Lana Lang), and Lex Luthor (who actively apposed any effort to resurrect Superman), Westfield and his personal team of scientists altered a human clone to look like Superman and be the closest human equivalent to a Kryptonian as they could genetically. After twelve failed attempts, the thirteenth clone; dubbed "Experiment 13", was successfully grown. Giving the clone implanted memories and undergoing an artificial maturation process, the clone escaped from Cadmus alongside the Newsboy Legion clones and became the fourth "Superman" to publicly claim to be Superman resurrected at the time.
Following Superman's return, Experiment 13 reveals on television that he was a result of Cadmus' DNA experiments. Westfield sends the Guardian to retrieve the clone after various D.N.Aliens fail to do so and the pair return with Superman alongside them. After learning the truth of the boy's origins, Superman let him use the "Superboy" name.

Succumbing to a cancer that he had contracted from wearing a Kryptonite ring to ward off Superman, Lex Luthor decides to have his mind transferred into a cancer-free cloned body with Cadmus' assistance. Faking his death by crashing a jet into the Andes; Cadmus retrieve's Luthor's body and removes his brain to grow a newly-cloned body around it. Passing himself off as his own illegitimate 21-year-old son who grew up in Australia, Luthor "inherits" control of LexCorp and seduces Supergirl (Lana Lang) to work towards the benefit of mankind. However, Luthor's clone body soon contracts a sickness that had started killing off all of Cadmus' clones and begins to deteriorate and age at a rapid rate. Blaming Cadmus for his condition, the streets of Metropolis erupts into open warfare between Project Cadmus and Lexcorp. The Underworlders, exiled creations of Cadmus led by Clawster, take advantage of the conflict to also attack Cadmus and as Westfield tries to exterminate the Underworlders with a missile aimed at the heart of Metropolis, Dabney Donovan returns as the creator of the Underworlders and the true mastermind behind the clone virus having allied with Darkseid.
Deciding that if he were to die, then he would take Metropolis with him, Luthor attempts to destroy the city with a barrage of missiles. During this incident, Donovan murders Westfield and cuts off his ear as a trophy as Cadmus is seemingly destroyed. However, the Project had simply taken advantage of the incident to go underground.
As Lois Lane discovers proof of Luthor's clone harvesting and false identity, she exposes the truth and a despondent Superman, who wanted to believe Luthor had turned over a new leaf, helps to apprehend villain, whose body had degenerated to such a state that he was now trapped in a vegetive state. Given a second chance by the demon Neron; Luthor is offered full health in exchange for services and his soul. "Returning" to Metropolis, Luthor freely turns himself over to the police and is put on trial where he is acquitted on all counts when he claims to have been kidnapped by renegade scientists from Cadmus Labs and replaced with a violent clone that was allegedly responsible for all the crimes that he was being charged.

Some time later, the Newsboy Legion members officially retired and Project Cadmus returned to the public view under the management of Mickey Cannon, a former Suicide Slum resident with a reputation for being able to "fix" anything. Under Cannon's management the Guardian and Dubbilex retained their posts while the new head of genetics was Doctor Serling Roquette, a teenage girl genius with a crush on the Guardian and Superboy, and Dabney Donovan was brought back under armed guard.
Shortly after this the Project temporarily fell under the control of the Evil Factory, which had become part of an organization called The Agenda; run by Lex Luthor's ex-wife, Contessa Erica Alexandra del Portenza. Concerned with only cloning for its own purposes, one of the Agenda's operatives, Amanda Spence, daughter of Paul Westfield, murders Superboy's girlfriend, Tana Moon, in retaliation for losing her father and the organization begins to suffer setbacks at the hands of multitudes of Superheroes and mutinous Super-powered beings from within their own ranks. After other individuals form another resistance cell, the 'Evil Factory' is ultimately defeated and Cadmus regains its independence.

When Luthor becomes President of the United States, Cannon and the Guardian became uncomfortable with the amount of government pressure on the Project and so used the events of the Imperiex War to quietly disappear underground; away from public awareness. 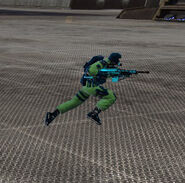