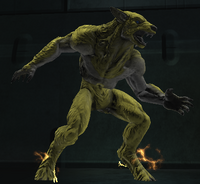 Primal Wolf Form is a Nature power that becomes available at Level 17.

Unusually, Primal Burst and Lupine Darts have a slightly larger knockdown range than the damage range (i.e. it is possible to knock down targets without damaging them at the edge of your range).

All other Speedster attacks and abilities can be purchased and performed in this form only if Super Speed was chosen during Character Creation.