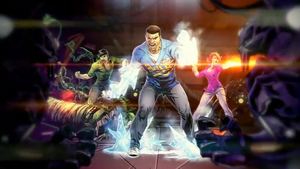 Chosen during character creation, a player's Powers determine the player's abilities, combat strategy and role in groups. Active powers unlock as you gain levels. When you reach Level 30, all active powers for the power set are available. Additional active powers can be gained by spending stat points in the character's movement mode tree or Iconic Powers.

Fire, Ice, Earth, Rage and Atomic  – These power sets have a Tank role option with higher defense, health and dominance. In group content, Tanks are responsible for keeping the group safe by attracting enemies' attention, absorbing their attacks and providing group immunity to control effects.

Gadgets, Mental, Light, Quantum and Munitions – These power sets have a Controller role option with higher vitalization and dominance. In group content, Controllers control the flow of battle by providing group power and incapacitating enemies.

Sorcery, Nature, Electricity, Celestial and Water – These power sets have a Healer role option with higher restoration and power. In group content, Healers are responsible for keeping the group alive by restoring health to the group members.

All Powers - Every power set has a Damage role option with higher precision and might. In group content, Damagers are responsible for killing opponents and completing objectives.

These power sets are available to all players in character creation:

All power sets are available to members with an active subscription.
Non-members may purchase Marketplace power sets for access.

See Also: List of Earth Powers
Characters that choose earth will rumble on to the scene and shake things up. Earth Powers can be used for both Tanking and Damage and features a Tanking mechanic that defers damage to a player’s summoned Golem. Shape Earthen constructs to crush enemies and reinforce allies. Call mighty, Earth-shaking forces to rattle and daze opponents.

See Also: List of Electricity Powers
Characters that choose electricity will imbue themselves with lightning. Electricity characters use these powers to shock their enemies or revitalize allies. They also want to spread their electricity so they can do as much damage to groups as possible. Electrify your enemies and resuscitate your allies. Manipulate and damage enemies with electrostatic forces.

See Also: List of Fire Powers
Players who choose to wield the wild and unpredictable forces of fire have to be tough. Fire characters like to get up front and blast away at enemies, and therefore they tend to draw a lot of attention. Cause flames to well up around your character, causing damage to anyone in the vicinity. Flames burst forth, searing your opponents and their nearby allies.

See Also: List of Gadget Powers
Characters with the gadget power will find themselves pulling out all manner of devices from their pockets and pouches. On the front lines, a well-placed gadget will help you control not only the enemy but the battlefield itself. Gadget characters are crafty and use their heads to place their devices strategically to achieve victory. Slip through the shadows and deploy cunning gadgets to manipulate the battlefield. Employ a variety of devious and deadly contraptions to baffle your foes.

See Also: List of Ice Powers
Characters that choose to master subzero temperatures make for challenging foes. During combat, ice wielders have the ability to lock down opponents who come within their chilling reach. Ice forms around you and enemy attacks don't seem to land. By using your powers to create defenses for yourself, you are a master of mitigating damage. When the occasional attack does strike true, the cold is passed on to your attacker, often freezing them in their tracks. Icy winds dance at your command, allowing you to push and pull enemies around the battlefield. No one can escape your arctic blasts, which allows you to control the direction of the fight.

See Also: List of Light Powers
The rings that grant the ability to create Hard Light Constructs are given to only a chosen few. In times of great crisis, however, the Green Lantern and Sinestro Corps may choose individuals to be reservists, thereby swelling the ranks of Light Powered heroes and villains. Those who wield the power of Light are ideal front-line combatants dealing massive damage with imaginative constructs, or supporting their allies when the fight gets thickest. Heroes wield the green power of Will, while Villains use the yellow power of Fear. Light characters can chain deadly and devastating combinations called Construct Combos by using a power followed by certain weapon combos. A Light powered warrior is tough to defeat when charging in to battle with deadly constructs. Rain devastation on your enemies with missiles and bombs, blast them with a hail of bullets, or smash them out of the way with brute force. In the midst of a tough group battle the power of Light can be used to support the team in many ways. Throttle and stun an enemy with a giant hand or use a blast of light to recharge your team's power.

See Also: List of Mental Powers
Characters with the mental superpower are masters of mind over matter. Using their unique abilities, they can move objects with a thought to defend themselves or damage an enemy. They can also use the force of their will in more subtle ways, such as creating illusions to disorient and confuse. Mental characters love to be where the action is and control the battlefield with their minds. With the brute force of your will, you can create force fields that encase enemies or send them flying down the street. By using your mental powers, create opportunities for surprise attacks. Such power can even make an opponent think they see something that isn't there.

See Also: List of Munitions Powers
Lock, load, and become a master of explosives and ballistics. Run and gun as you cut paths of destruction through your enemies with big guns and bigger explosions. Use your ordnance expertise to take control on the battlefield or simply blast right through the fray. Lay waste to the battlefield and any enemies that happen to be there with military-grade ordnance. Knowledge of up-and-coming prototype artillery is half of the battle.

See Also: List of Nature Powers
Characters that choose the nature power will find themselves masters over primal forces. Nature characters draw upon these forces to keep their allies alive or wither their enemies away. When the battle gets really tough, they can also let the call of the wild surge through them and actually become a beast full of rage, cunning and animal instincts. Wield poisonous botanical powers to restrain and overwhelm your enemies and to soothe the wounds of allies. Call forth the attributes of a variety of frightening and fantastic animals to dominate enemies and aid allies.

See Also: List of Quantum Powers
Manipulate time, control gravity and twist the very fabric of space itself! Characters using Quantum Powers can slow down opponents, change their density, or even teleport behind them by altering time, manipulating gravity, and folding space. Control the flow of time and control your enemies futures. Bring your enemies to their knees by manipulating space and generating graviton fields.

See Also: List of Rage Powers
Tap into the Rage of the emotional spectrum to create energy blasts, deadly blood plasma attacks, and even vicious constructs. Wield this Red Light with righteous fury or be driven by vengeance and petty anger. Anger powers allow you to eradicate your enemies through blind rage. Defer incoming damage and share your rage with your allies.

See Also: List of Sorcery Powers
Characters who wield the unseen forces of the universe hold the power of life and death in their hands. Sorcerers can doom enemies to failure or ensure their allies have the power to carry on the fight. They are ideal for combat support, often tipping the balance of a fight with their spells. Drawn to your mystical power, fantastic arcane creatures never leave your side. Choose wisely which pet you summon, for each will behave according to the mystic forces that created it. Whether attacking, defending, or performing some other fantastic feat, legions of powerful minions are at your service. The fate of many rests in your hands as you change the course of battle. Generate good or bad karma for you, your allies, or foes. Gathering these positive and negative energies allows you to elevate or enfeeble those around you.

See Also: List of Water Powers
Keep your allies alive with powerful storms and flowing water. Command water in and around allies and enemies. Bend and blast water into incredible streams and torrents to unleash a flood of destruction, or shape it into awe-inspiring constructs to wash away your enemies. Soothe the wounds of your allies or envelop them and yourself with the shielding power of water. And turn the tides of conflicts by pulling strength from the mystical energies of the ocean depths.