DC Universe Online Wiki
Register
Don't have an account?
Sign In
Advertisement
in: Christmas Event, Fight for the Light, Origin Crisis,
and 11 more 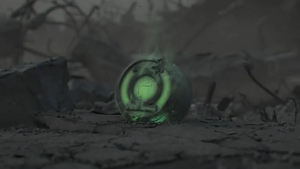 A Power Ring is a piece of jewellery that grants the wearer incredible and incomprehensible powers and abilities. Considered by some to be the most powerful weapon in the known universe, the ring's power and abilities depend on the skill, imagination and mental attributes of the wearer.

The rings use pure energy supplied by a Power Battery, which in turn is supplied by an emotion entity such as Parallax or Ion. This energy allows the ring the ability to affect and use fundamental forces of the known universe; including electromagnetic energies such as gravity, radiation, heat, light, and concussive force.

Members of the Green Lantern Corps use green power rings built and developed on Oa. Powered by the willpower of the user, the green power ring is an autonomous item that can assist its wielder in various capacities in addition to providing its service as a weapon capable of creating constructs of varying strengths depending on the wielder's willpower. The strength of a green power ring can be negated through the manipulation of a wielder's emotional state, focus and concentration.

Members of the Sinestro Corps use yellow power rings built on Qward. Though functionally similar to a Green Lantern's power ring, yellow power rings are fuelled by the fear within an environment instead of willpower. Members are selected for their skill at intimidation and terror. The ring amplifies the aggressive tendencies of the wearer. The yellow rings are charged by yellow power batteries, which are in turn linked to a yellow Central Power Battery based on Korugar. Aside from the recharging limitations common among the various Corps, their only known weakness is that their power can be drained by a Blue Lantern's power ring.

Members of the Orange Lantern Corps use orange power rings first developed on Okaara which are powered by the avarice (greed) of the wielder.
While possessing similar abilities to Oan and Qwardian rings, Orange rings possess the side effect of instilling the user with an insatiable hunger for all things. The power of the orange light allows the user to "steal" the identities of those they kill, transforming them into "Orange Lantern" constructs. Additionally, these "Orange Lanterns" are able to steal the identities of others for the user in the same way. The orange light also has the power to absorb the energies of other power rings, however, it cannot absorb constructs produced by Star Sapphire or blue power rings. Blue power rings can also nullify an orange lantern's insatiable hunger when in close proximity.

Members of the Red Lantern Corps use red power rings forged through blood magic on Ysmault. Powered by rage, red lantern rings feed on the rage of their users and the surrounding environment and can be additionally charged by the blood of those the user kills.
Unlike Green Lantern rings, which provide a helpful commentary to their user, red rings constantly emit violent commands that can further drive their wearers insane with rage, reducing them to little more than snarling beasts. Once attached, the ring functionally replaces the user's heart, tainting their blood with red energy, and forces it out of their body through their mouth as a highly corrosive substance. A red ring's energy can also corrupt the energies of other power rings, keeping them from functioning properly. A Blue Lantern's power ring is the only known power source capable of neutralizing the red ring's influences, and are also the only means of removing a red power ring from its user without killing them.

Members of the Blue Lantern Corps wield blue power rings built by the Guardians Sayd and Ganthet on Odym. Fuelled by the wielder's capacity for hope, while possessing similar abilities to the Oan power ring, Blue Lantern rings only possess the capacity to utilize defensive abilities (eg shields, etc) unless they are near an active Oan power ring; whereupon the abilities of both rings are augmented considerably.
While augmented by an Oan power ring, Blue Lantern rings have the ability to heal wounds and regenerate lost body parts. In contrast, blue lantern rings can negatively impact the performance of red, yellow or orange rings; neutralizing the corruptive effects of red and orange power rings, blocking the energy-stealing properties of orange rings, and draining the power of yellow power rings.

Members of the Indigo Tribe use indigo power rings created by the Green Lantern (Abin Sur) and the Noktian Natromo. Fuelled by the power of compassion, an Indigo lantern's ring is used in conjunction with their staff to mimic the emotional energies and abilities of other power rings.
In addition to typical power ring abilities, the indigo ring, on its own, inflicts upon its wielder the capacity to feel empathy (much like how Okaarian rings inflict their wielders with constant avarice) as long as physical contact is retained. Classified as a "parasitic ring" (like the red, violet and orange rings), indigo rings bond most effectively with wielders that originally lack compassion as the ring's ability to wield multiple emotions is then not hampered by whatever the wielder's original "feelings" were.

Members of the Star Sapphire Corps use violet power rings forged by the Zamarons from the Star Sapphire Crystal.
Empowered by the emotion of love unleashed, violet rings have the unique ability to create crystal constructs (in addition to typical light constructs) to "preserve that which the wielder loves". The rings can also detect when a love is in jeopardy, locate it, and enable the wielder to teleport to alternate locations.