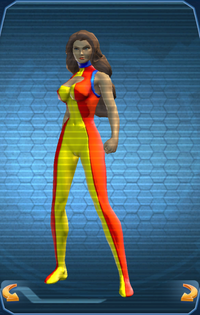 Power is a Female-only Armor Style Set based on the uniform of the superhero Power Girl.

While otherwise indistinct from the typical superhero garb of tight spandex, Power Girl's uniform is largely noted within the communities of both heroes and villains for the material cutout centered across the chest which reveals her cleavage.
Power Girl initially left the chest of her uniform open because she wanted to decide on a symbol to put there, like Superman's. However, nowadays, when asked about the window, she replies that the costume "shows what I am: female, healthy and strong. If men want to degrade themselves by staring, that's their problem, I'm not going to apologize for it." 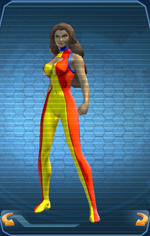 The Power's overall color-scheme consists of three colors that can be chosen by the Player in the Style Window. Specific sections of the style's pieces can also be allocated a more specific colour by the Player.