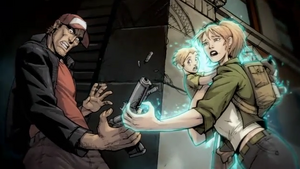 Player versus Player (PvP) is a videogaming term used to describe a Player's interaction with other Players or PCs (Player operated characters) in a videogame.

Player versus Player gameplay most often consists of competitive actions between players, including battles, races, or point collection. The term is used most widely in Massive Multiplayer Online Role Playing Games.

Provided the player is on a PvP Server, the player can fight with players of the opposite faction at any time within the open cities of Metropolis and Gotham City. These actions do not provide any actual reward in the form of Influence or Marks of Valor (that replaced Marks of Tactics, Marks of Conquest, and Marks of Victory (old)).

While this ability is only available in PvP Servers, both PvP and PvE Servers possess events such as The Ring War in Metropolis and the Diamond Heist in Gotham, where players can battle each other in the open cities regardless of the server type. Participating in these events will reward the player with Influence or Marks of Valor  which can be traded in to specific Vendors for specialized PvP weapons and armour sets.

Arena PvP takes place in specialized instances where teams of various sizes (4,6 or 8) compete against each other to complete different objectives depending on the competition being played (Capture the Flag, King of the Hill). This style of PvP also rewards Marks of Valor and Marks of Legend

This style of PvP is similar to Arena PvP with the exception that the player dons the appearance and moves of iconic Heroes and Villains.
Players of both factions are free to play as whomever they choose regardless of whether they are Hero or Villain.

Participating in this PvP will reward players with Marks of Valor and Marks of Legend which can be used to unlock additional iconic characters.