Calls an affected 25th century security robot to attack your enemies. Servo's programming is quite resilient and has partially resisted Brainiac's attempts to assimilate him.
Item ID: 3068072

The Partially Assimilated Servo Unit is a special event trinket that summons a pet to aid the Player Character.

Using the Servo Unit will grant a 5% Health buff for 30 seconds and summon a security robot from the future that will chat with you about various topics.

The Altered Servo security robot is summoned on activation in addition to a 5% Health buff for 30 seconds. 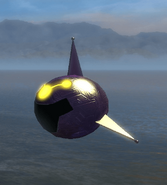 Retrieved from "https://dcuniverseonline.fandom.com/wiki/Partially_Assimilated_Servo_Unit?oldid=247600"
Community content is available under CC-BY-SA unless otherwise noted.