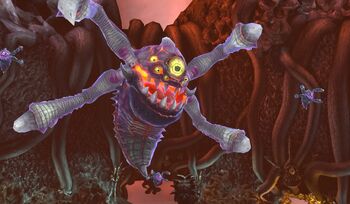 Paradox Wave is a Tier 2 Raid introduced in the Origin Crisis DLC.

There is a cost to disrupting time and space, and consequences even Future Lex Luthor and Future Batman have not anticipated. Can you stop this new threat before reality itself is destroyed?

The enemy combat rating is 101. 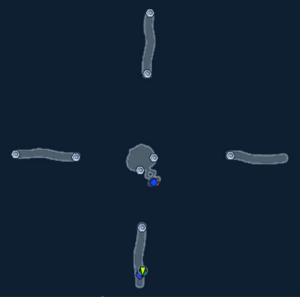 Players will have a choice to confront the main boss or they could attack the 4 sub bosses in the 4 tunnels surrounding the main boss. Each boss has different attack styles so technique and skill are required to face them. If players take down a sub boss loot will drop. If players decide to take down the main boss straight away they will have to confront the sub bosses in the arena except no loot will drop from the sub bosses only the main boss. When players are attacking the main boss certain stages will happen. At one stage the boss will go to the middle of the arena and create a shield, 4 totems will appear. Players must attack these totems to destroy the bosses shield. In the next stage 2 random players will be teleported to a cage barrier. The other 6 players must transport energy crystals to the barriers to free the players. This stage is not urgent unless a solo healer, both trolls or the tank are trapped.

If the four side-bosses are fought in the main room it is possible to get double, triple or even quadruple loot by taking them down at the same time.

It is recommended for the entire group to have at least 98 CR to beat the raid but it will still be difficult. It is impossible beating the Wave with a CR below 90.

Since game Update 29, the difficulty of this raid has been reduced and the item level of gear has been increased.

Since game update 32, the difficulty of this raid has been reduced to Normal mode in preperation for DLC 9, War of the Light Part I.

After the release of DLC 9 and the new item level 90 gear, people have been finishing this raid in flashes, with a group consisting of at least 3-4 people using item level 90 gear and the rest of the group are new to the raid, the raid will still be quite easy. So now with Level 90 gear, it will be very ludicrous if a person still searches for 99+ groups, even for the EO feat, a group of new people can finish the raid in an average of 10-20 mins, unless there is a fight or a problem, the raid shouldn't take long.