Paradox Reapers are level 30 creatures that can randomly be found in the streets gathering around a big electricity orb. Sometimes they will try to transport small orbs to different locations. If you stop them, you can transport back those small orbs to the big one, but nothing seems to happen other than gaining 16 xp.

They attack with rapid long-ranged attacks that hits 50s and a melee attack that have been witnessed to hit up to 186.

Despite their formidable level, they are not as dangerous as they might seem. As long as the player only engages one at a time, a medium level player has a good chance in defeating them. They appear either alone or in pairs. Note that they respawn very quickly. Upon defeat, a few Paradox Reaper Fragments may spawn.

They may say something along the lines of "you cannot outrun the Speed Force". They may have something to do with the Lightning Strikes. Occasionally, a non-interactive human clad in some sort of protective suit would be found near them, along with a strange machine. The equipment seems to be designed for combating the threat of the creatures, as they may say "You device can't stop the paradox!" A single Paradox Reaper would only appear by itself when they come with this figure. They do not seem to respawn when appearing by itself.

The man is revealed to be STAR Labs Security once the player reaches level 30. Once revived, he would ask the player to defend the device that would seal the portal. The player must fight continuously respawning Paradox Reapers. Any nearby NPC allies would help in the battle, making it much easier. When the device is fully charged, it would explode, taking the portal with it. It is unknown whether this serves any purpose.

When a player manages to defeat a pair of Paradox Reapers several times, a giant creature would emerge from the electricity orb. It is very similar to a Paradox Reaper but at least twice as tall and has a bluer color scheme. It is not attackable and not aggressive. It runs around for a few seconds before disappearing along with the orb.

Since Update 28, Paradox Reapers will not be spotted around Gotham and Metropolis. All Paradox activity will be in Central City. 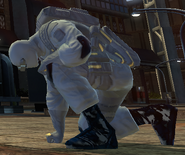 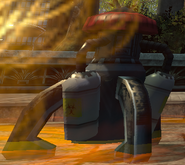 An electricity orb, or a portal.

A Paradox Reaper portal is marked by a unique pillar of light.

The large paradox creature, with a Paradox Reaper next to it.

The device sealing the portal.

The Sentinels of Magic battle the Paradox Reapers. 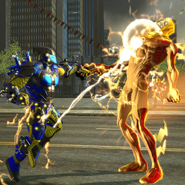