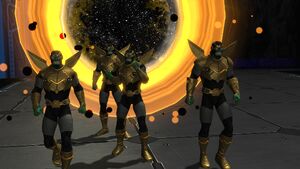 The Parademons are shock troops of Apokolips used by Darkseid to maintain order of the planet.

Loyal to their master but none too bright, the armored Parademons fly through the air, carrying powerful weapons used to quell the rabble. Their true strength is in their numbers, which reach into the thousands. When acting together, they can overwhelm even the toughest heroes. They are chosen from the most sociopathic and cruel residents before being given gliders and trained in combat. They are often accompanied by gigantic dogs called Hounds.

In the comic Salvation Run, Parademons are dispatched by Desaad to attack the villains that were dumped onto their training camp. They killed Hyena, Brutale, General Immortus, and Solomon Grundy, the last of whom turned up alive in later issues. Most of them were killed when Lex Luthor self-destructed the teleportation device.