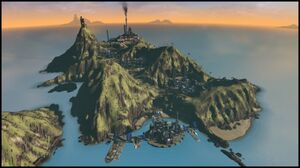 Oolong Island is a remote island located in the Yellow Sea off of the west coast of North Korea.

Originally built by Intergang to create superweapons for their schemes, the cartel kidnapped various intellectually superior but morally questionable scientists and inventors and gave them free reign over the island with unlimited resources.
With the island's operations overseen by Chang Tzu, following Black Adam's rampage following the death of his wife, the island continued operating despite Intergang's withdrawal. The island is now used as a haven for various intellectual minds to engage in their chosen arts freely without regard for morality.

As Chang Tzu was a member of the Great Ten; China's metahuman defender force, Oolong Island fell under Chinese jurisdiction and became a national stronghold for the country. During the year following the Infinite Crisis, under orders from Beijing, Chang Tzu commandeered the likes of Doctor Sivana, T.O. Morrow and Will Magnus to design and build doomsday weapons known as the Four Horsemen to attack Kahndaq.

Following retribution from Black Adam the island continued operating despite Intergang's withdrawal. With the intention of shutting down its activities, Checkmate employs the Outsiders to infiltrate the island, however, the team is overwhelmed and Nightwing, Sasha Bordeux and Captain Boomerang (Owen Mercer) are captured and transported to North Korea for experimentation before they were rescued with Batman's aid.

After falling into despair over aiding in the construction of the Four Horsemen, Veronica Cale observed the arrival of various heroes attempting to retrieve the captured Adam from Oolong's facilities as well as the arrival, and subsequent departure, of the combined Outsiders/Checkmate taskforce months later and noted that, while heroes were willing to treat the symptoms of the island's "Science Squad" they were unwilling, or unable to, shut it down permanently. Returning to the facilities, Cale seduced various scientists into revealing the island's command structure and from there she worked her way up to become the President of Oolong Island. Attaining sovereignty of the island and independence from the likes of North Korea, Cale now oversees the island's "Science Squad" in an effort to repent for the monstrosities her ambition had previously unleashed.